After a series (one's a series, right?) of close calls, I graduated from the University of Illinois in January of 1999. I proceeded to leech off my parents for a time (thanks!), and finally left the nest after a mere 387 days. I've since settled down in Mt. Prospect with my beautiful wife and enchanting children. Some say they look like us, but I don't really see it. 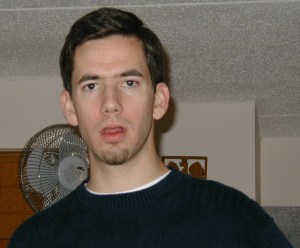 Yes, I did buckle down and put my résumé on the Internet, despite the fact that I dislike it (the Internet). Maybe this time I'll remember to update it once in a while.

I think a brief list of my interests should suffice to bore you to tears. I like music, both absorbing and producing, and I play piano in my own unique way. Though the barrage of people pounding on my door to ask what kind of music I like has lessened in recent months, I still have my incredibly outdated album list available. Also, as you might expect from a Computer Science major, I like to fool around with computers.

I'm interested in language, both English and foreign. I studied French in high school (and who didn't), Japanese in college, and some Esperanto, Spanish, and Polish by myself. I did travel to Japan on vacation, and finally put the language to practical use.

I held (suppose I still do, at that) the rank of Senior belt in Tae Kwon Do during college, but I've let myself go since then (c.f. the picture at left).

That's about it. Enjoy your stay.